The Unreasonable Significance of AAP in Indian Politics 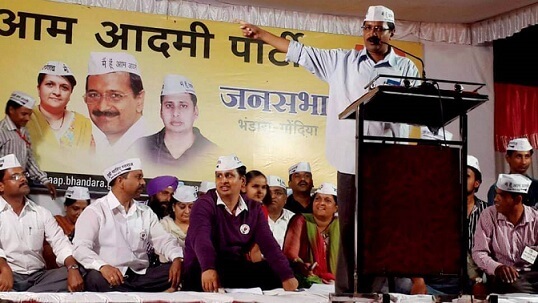 In the history of Independent India, much like other democracies, political parties have either gravitated around a particular ideology, caste, religion, culture, ethnic or linguistic group or have originated as offshoots of another political party. There have been two exceptions to this general rule. The first was Chakravarti Rajagopalachari’s Swatantra Party and the second is Arvind Kejriwal’s Aam Aadmi Party (AAP). The former generally propagated capitalistic market reforms as its core value while the latter promulgates free quality education and healthcare as its USP.

There is no mass base attached to a particular social institution that can be identified with either of these two political parties. AAP’s rise has been phenomenal in the past decade but it is at best mediocre when compared to Swatantra Party’s achievements. Launched in 1959, the Swatantra Party won 207 seats across the nation in the assembly elections of 1962 and 44 seats (the number should ring a bell) in the Lok Sabha elections of 1967 to emerge as the main opposition to the Congress Party. By contrast, AAP has been unable to expand its influence outside Delhi. Yet, winning 67 out of 70 seats and then coming back to power by winning 62 seats is a feat truly marvelous that has never been achieved earlier in Indian politics.

This also means that the return of Arvind Kejriwal as the chief minister of Delhi for the third time in a row is no mean achievement. The vicious campaign that the Bhartiya Janata Party (BJP) ran combined with the monetary and state resources utilized by it would have made any opposition party freeze into inaction. No so AAP. Kejriwal’s matured politics of not falling into the BJP’s trap of hyper-nationalism and religion and rather focusing on the development agenda (displaying clear parallels with Narendra Modi’s 2014 election campaign) ensured that the narrative of the elections was not inundated by BJP’s hate campaign. Self goals inflicted by the BJP because of the brutal statements made by its leaders too helped AAP. Finally, as the first-grade psephologist but not so successful politician Yogendra Yadav pointed out: it is becoming a pattern to win elections by focusing solely on the delivery of one or two welfare schemes and weave the election campaign around them (remember the Gujarat model). AAP is not the only political party to have launched free welfare schemes but is today certainly the most efficient at utilizing them for winning elections.

Newer political parties in India have risen from time to time and have captured power in various states (Biju Janata Dal, Jharkhand Mukti Morcha, All India Trinamool Congress, etc.). These parties have ruled over different states while enjoying complete rights laid out by the State List and Concurrent List of the Indian Constitution. These regional parties have played foundational roles in deepening the federal structure of the Indian polity. By contrast, Delhi is like a mere municipality with major avenues of power (police, public order, and land) outside its purview. Working as the chief minister of Delhi is like being given a rifle for field shooting after tying both hands. No matter how adept you are at aiming, you will always require somebody’s support for pulling the trigger. Despite this handicap, AAP was able to deliver on many fronts. Its politics of development without catering to any social identity has worked very well because Delhi is the most cosmopolitan city in India today—a microcosm of the nation. Delhi is also the seat of power and houses many of the biggest media organizations whose presence inflates the focus on Delhi’s elections. Publicity is another art that AAP has mastered over the years and which has contributed to its success.

Arvind Kejriwal has twice earlier tried to expand AAP outside Delhi and has entirely failed or mildly succeeded depending on how one quantifies success. AAP has a highly dedicated cadre both on the ground and on social media platforms. It brings an image of corruption-free leadership, efficient delivery of welfare schemes, and an appeal among the middle-class in metropolitan cities. Ironically, the greatest obstruction to the expansion of Kejriwal’s AAP is Kejriwal himself. In a sense, AAP has evolved to become a personality cult-based party that earlier led to the ouster of Yogendra Yadav, Prashant Bhushan, and Kumar Vishwas. There is nothing unusual or wrong in this phenomenon since powerful leaders rise in every party and workers tend to gravitate around them over time. But, for expanding across the nation, the crucial factor would be how much space Kejriwal would be willing to cede for the rise of new leaders within the party across the nation. It is to be seen if Kejriwal will be able to work together with many power centers in the party while continuing as the center of mass. For example, will Kejriwal be willing to bequeath the chief ministership of Delhi to Manish Sisodia or somebody else while he himself would travel across India for strengthening the party (perhaps by becoming a member of parliament to attack the BJP on issues concerning the whole nation)? After all, Kejriwal is the most recognizable face of the party and its chief campaigner.

AAP is a young political party. It will evolve with time and so will Kejriwal. With its organizational capabilities, AAP has shown that it has the mettle of ushering Indian politics toward a new narrative focused on development. Not having to answer for old sins like the BJP and Congress goes in its favor by the virtue of being a new entrant. However, AAP will have to develop an ideology of its own for appealing to the emotional psyche of the masses. Mere activism will not do. Human beings irrespective of their education do not simply think in terms of development and quality of life when they vote. Rather, there is a certain personality-based and emotional quotient involved which makes them follow a particular ideology. Congress had at times combined Soviet-style Socialism and Nationalism as its ideology whereas the BJP today rides on a wave of Religion, Hyper-nationalism, and welfare-based Socialism all combined into one. AAP will have to adapt accordingly to make space for itself in the larger Indian political landscape. It would not work anymore to just blame everything at other parties since as a Kurdish saying goes: if you point a finger at someone, three others point back at you.

Should the Government Dabble into AI Researchers’ Preference to Publish Openly?
The Myth of the Supremacy of a Majority Government in India