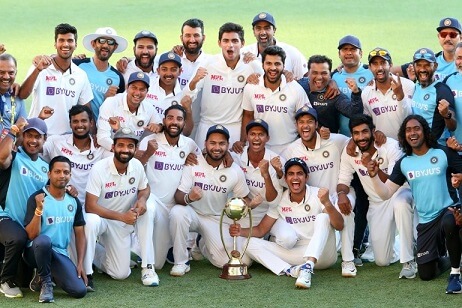 It is excruciatingly hard to educate an American or someone from mainland Europe about the beauty of test cricket. Five days of sweat and blood, surprises and monotony, skills and fortitude, are too much to imagine for those mere mortals who cannot think beyond athletes running madly behind a ball either to kick it or to throw it into a net. Oh! poor souls, they are missing out on the most sophisticated game that humankind ever contrived or its imagination conceived.

What the West Indies cricket team had been for the generation before us, the Australian cricket team has been for ours—resolute, formidable, terrifying. Nobody of my age can ever forget the 2001 test series between India and Australia and for those millions who were not born then, today’s win and this test series will become what the 2001 test series has meant for us for two decades now—magical, unreal, legendary. In many ways, this Indian victory is the greatest victory ever in the history of the game for us. It will surely go down as one of the all-time greats.

To get dismissed for the lowest-ever total of 36 in the first test to fight back all the criticism, abuses, and injuries in a tightly-fought series shows the sheer amount of perseverance and confidence manifest in this cricket team. What more can a fan of the game ask for when the whole series could go any way until the last hour of the final day of the final test match. Surely this test series has to be the best movie trailer for this beautiful format of the game (if one is still required). To play without your regular charismatic and aggressive captain, without your regular bowling squad, without the experience of test cricket at this level behind you, and without much practice compared to your opponents because of the COVID-19 lockdowns, and still come at the top against an Australian team having Smith, Warner, Hazlewood, Lyon, and Starc makes this victory so very special. To top it all off, the victory came at Gabba where the home team had not lost a single test match for the past 32 years!

There are so many heroes of the series that you could easily make a complete Avengers movie featuring them and still have more left in reserve for DC movies. Rahane showed once again that you can lead the team from the front and be cool at the same time. It did not mean that he was not aggressive but rather in his own understated sense, he led the team with dogged tenacity toward victory in the second test and set the tone for the remaining two tests. The way he played today, he left nobody in doubt that India is playing to win the game and not to draw. Pujara, the new wall of the Indian cricket team, kept on getting hit on every inch of his body by lightning-fast deliveries and but he stood tall. Singlehandedly, Pujara made sure that India will not lose this test series. Being the second-highest run-scorer for India in this series after facing the most number of deliveries by far, Pujara showed once again why he is the greatest batsman in this form of the game.

Talking about facing deliveries against all odds, who can forget the partnership between Ashwin and Vihari in the third test? Batting against the greatest pace lineup in the world and battling against the masters of sledging, the mental fortitude showed by them to draw the game will also go down in history as one of the best partnerships. Again, only cricket fans can understand how the outcome of a draw can mean much more than a win. Numbers themselves speak for Ashwin both with the ball as well as the bat. It is unfortunate that he is not as much appreciated as he should be but it was a delight to see him acknowledged as only the second Indian player in the recently announced ICC Test Cricket Team of the decade. Jadeja and Bumrah too played their roles to perfection in this series.

“There is a tide in the affairs of men, Which taken at the flood leads to fortune,” wrote Shakespeare. The full meaning of this statement was grasped by Mohammad Siraj, Shardul Thakur, T. Natarajan, and Washington Sundar who had a combined experience of four test matches between them before the final test match. This has to be the least-experienced Indian bowling lineup in the history of our test cricket. Yet, the way they bowled and placed Australia on the back foot tells us a lot about two things. First, how very competitive the first-class cricket in India has become. Second, how much the Indian Premier League (IPL) has helped in spotting new talent from remote Indian neighborhoods and has provided them a platform to play with and learn from the best in the world.

Shubham Gill and Rishabh Pant of course deserve a paragraph of their own. To play under pressure at that age and perform so well gives a sure foreboding of the so many beautiful things that will come their way in the future. The way they batted today, they can now surely win any election from any constituency in India! They along with Pujara were today the final architects of the tomb beneath which is buried Australian exceptionalism and arrogance.

Of course, all coaches who have groomed these players from Rahul Dravid to Ravi Shastri to those of the IPL and local cricket grounds across the country should take a bow. Their combined efforts have taken Indian cricket from having a tough spirit to an indomitable spirit.

Sometimes, there are so many emotions and facts spawning every moment in one’s mind that one gets overwhelmed and lose the train of thought. It is exactly what I feel is happening to me now and so I shall stop here. All I must write now is, thank you very much to the Indian Cricket Team and to the game of Cricket for putting millions of smiles amidst these pandemic times.

Toward 2021: Six Trends Originating from COVID-infested 2020
Prime Minister Modi is Steering India Toward the Chinese Road