Intercaste, Interreligious, and Intercultural Marriages: Gandhi's Time and Ours 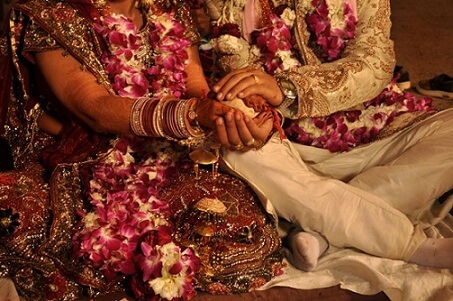 In 1915 when Gandhi returned back to India from South Africa, his views on intercaste marriages and dining were still regressive in the sense that he did not encourage either. Personally too, Gandhi strictly followed such practices despite the fact that he soon admitted some so-called Untouchables into his newly established ashram in Ahmedabad against the wishes of many. In fact, Gandhi had staked the survival of his ashram for the cause since many patrons had despised his move of admitting Untouchables into his ashram and had retracted their money.

Despite working for the emancipation of Untouchables for a long time by now, Gandhi could not still accept the idea of a pluralistic India in which intercaste and interreligious marriages could happen. Yet, two decades thence, Gandhi was himself promoting intercaste (and intercultural) marriages and had even blessed his youngest son, Devdas, to marry C. Rajagopalachari’s daughter, Lakshmi (Devdas was a Gujarati Baniya while Lakshmi was Tamil Brahmin). Going a step further, Gandhi soon made it a rule to only attend marriage ceremonies if one of the parties was from the Untouchable community. So what had changed in these two decades?

In 1931, Gandhi and Ambedkar had met for the first time. In the words of Ambedkar’s principal biographer, Dhananjay Keer, ‘The interview sounded the beginning of a war between Gandhi and Ambedkar.’ Gandhi tried to assert his dominance over Ambedkar in the meeting by pointing to his earlier work with Untouchables while Ambedkar was not impressed and replied, “All old and elderly persons always like to emphasize the point of age….But let me tell you frankly that Congress did nothing beyond giving formal recognition to this problem….We are not prepared to have faith in great leaders and Mahatmas. Let me be brutally frank about it. History tells that Mahatmas, like fleeting phantoms, raise dust, but raise no level.” Gandhi, by then the acknowledged leader of the Indian freedom movement must have been flabbergasted to hear this from an unknown lawyer-activist. The contention between them presently was the issue of separate electorates for the Untouchables which was being opposed by Gandhi and supported by Ambedkar.

After the Second Round Table Conference in London, Gandhi forced Ambedkar’s hand by going on an indefinite fast (and risking death) to get his demand for a joint electorate accepted (known as the Poona Pact). To show repentance and save Gandhi from dying, hundreds of temples were opened to the Untouchables by the Caste Hindus across India. But the encounter between Gandhi and Ambedkar had changed both of them. In the words of the cultural critic, D. R. Nagaraj, Gandhi had ‘taken over economics from Babasaheb [Ambedkar] and Ambedkar had internalized the importance of religion.’ It was in the coming years that Gandhi came round to Ambedkar’s view that only the abolition of the Caste System can lead to the emancipation of lower castes. While in 1933 Gandhi started a new weekly named Harijan (Children of God) which published pieces about the emancipation of Untouchables so that they may join the fourth caste, by 1935, Gandhi wrote a piece titled CASTE HAS TO GO. On the other side, Ambedkar had realized the importance of religion and declared the same year as a protest that he will not die a Hindu (he did later convert to Buddhism just before his death). The one thing they both still agreed was that intercaste marriages must be encouraged as an antidote to the evils in the Hindu society.

This in a few words is the story of the evolution of Gandhi’s views toward the Caste System (I will put out a detailed version elsewhere). Intercaste, interreligious, and intercultural marriages are still not very common in India. Various communities still conduct public events for matchmaking within their castes while matrimonial ads on various platforms boldly mention the demand that the prospective bride/groom must be from the same caste. While marrying outside of one’s caste is becoming more common in urban India, marrying outside one’s religion is still rare. This is a phenomenon that cuts across all income groups and social status. It is natural then that an advertisement by Tanishq would cause so much uproar in the nation that no less than the nation’s Home Minister would comment on it.

Why is there such a prime focus on marriage by all communities? This is because Marriage is the building block of society. It is the most fundamental social institution which shapes the upbringing of a child. Pluralism, nationalism, liberalism, conservatism, capitalism, socialism, and all other isms are only secondary beliefs that the child may adopt later in life. The foundational building block of these beliefs is the child’s family and hence all communities take so much interest in the institution of Marriage. Taking this point a step further, we can also say that the functioning of other important social institutions like Religions, Nations, and Democracies is dependent on the institution of Marriage.

Being so much diverse that India is, it is inevitable that people will marry outside their own social group. Instead of frowning over such instances, it would do much good for India’s pluralism to encourage such marriages. After all, children born in such marriages imbibe the best of both cultures. They not only inherit the best social practices from both cultures but also become symbols of India’s diversity. It is then a tragedy that honor killings still happen in India when such marriages take place while it is even more common that parents abandon their children if they marry outside of their own social group. These evils are a testament to the atavistic nature of Indian society.

One hidden cinematic jewel that I could not help but mention in this respect is Mahesh Bhatt’s multi-starrer Zakhm (1998). The movie which won many prestigious awards including a National Award for Ajay Devgn is a masterpiece in portraying the travails of those who marry outside their religion in India. Since I do not want to reveal the plot here, I would only say that it is a must-watch to understand the complexities of Indian society’s attitude toward such marriages.

Finally, all that I wrote above comes with a disclaimer: while intercaste, interreligious, and intercultural marriages should be promoted, this should not be done at the cost of losing one’s own culture. In plain terms, this means that in such marriages, there must be no act of coercion to change one’s religion, quintessential way of life, or identity. Any such act of coercion invalidates (indeed abrogates) the very essence of the syncretic confluence of the two cultures.

Merits and Demerits of the Indian Parliamentary System
U.S. Election Day Results: Not India but the World will be Impacted