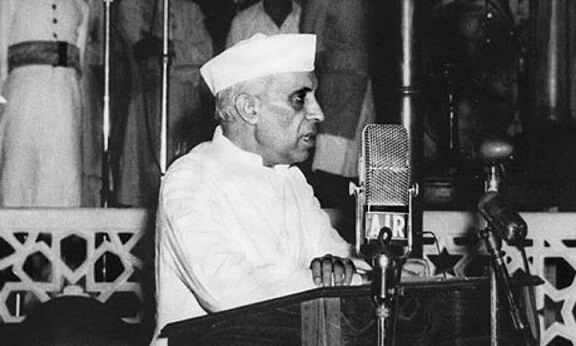 Four score and seven years ago, millions in India celebrated Independence Day for the first time after the declaration of Purna Swaraj a few months ago. The president of Congress who drafted and passed the resolution for complete independence of India, and even persuaded Mahatma Gandhi for the same was none other than Jawaharlal Nehru. This essay is about his bitter tryst with progeny.

My earliest memory (apart from annual Children’s Day celebration) of Jawaharlal Nehru is to save money for buying the Discovery of India. I must have been about ten or so at that time. My father had recommended reading the book suggesting that it will help in understanding our nation’s history. It is a different matter altogether that instead of buying the Discovery of India, I bought Mahabharata by C. Rajagopalachari, that other great devotee of the Mahatma, the keeper of Mahatma’s conscience as he had put it. I had just completed reading Ramayana by C. R. which I had issued from my school library (a very small library but still useful for my intellectual appetite as it stood then) and was deeply influenced by the simplicity of its language and moving portraits of the characters. Glancing through the back of the book I learned that C. R. had also written Mahabharata and that drove me to buy his portrayal of the sister epic of Indian mythology. This act of mild blasphemy was committed against the wishes of my grandmother who is a deeply religious woman, and warned me against possessing Mahabharata inside our home suggesting that it leads to conflicts in the family.

But, this post on his birth anniversary is about Jawaharlal Nehru. I was surprised during my recent visit to India when my parents informed me that at one point in kindergarten I portrayed Nehru in some dress competition in my school. I have no recollection of this event. I am sure at that time it would have been a decision taken by my grandfather and my parents. Today, after about two decades of this incident my grandfather who had seen Nehru many times and lived during his time still refer to him as “Panditji” and one can always hear praise about Nehru from him. Alas! I cannot say the same of my father who as I mentioned earlier had recommended me to read the Discovery of India. His views have drifted more towards the right and have become distorted though I must admit he still is thankful to Nehru for setting up the IITs. During my same last visit to India, I also had quite a lively discussion on Nehru with my friends in Bangalore (or, should I say Bengaluru) who work in well known IT firms. Few of them went to the extent of using many a colorful phrase for the first Prime Minister of Independent India. Faced with facts and data, those software engineers resorted to being irritated and remarking that “Data does not matter!”

I consider myself to be a Nehruvian Indian. The uniqueness about being a citizen of India is that I do not have to belong to a particular religion, or caste, speak a common language, possess similar skin tone, share a common culture and yet I can be as patriotic as any other Indian. I do not have to be a Hindi speaking fair-skinned male Hindu brahmin living in the Gangetic plain to be as patriotic as any other Indian, distinct from myself in any or all the possible aspects one can imagine. To be a Nehruvian Indian as historian Ramachandra Guha aptly describes means, “one must rigorously separate Jawaharlal on the one side from Indira and Rajiv and Sonia (now Rahul too) on the other. It also means that one must re-unite him with Mahatma Gandhi.”

The man, Jawaharlal Nehru, was a rebel, an atheist (to use the term loosely), a gifted writer, a fairly successful lawyer, an avid reader, a great letter writer, a firm Democrat and much more. He possessed a childish charm and perhaps was obstinate at times like children tend to be. He was also somewhat narcissist as evident from his name being carved on his belongings in the Swaraj Bhavan. But, at the same time, he was not shy to go into detail about his own failures and weakness and shortcomings in his autobiography. He was also a great student of world history. The books and letters written by him bear the proof of his passion for writing and his quest to find trends and seek lessons from history. His book “Glimpses of World History”, in my view was correctly reviewed by the New York Times as “One of the most remarkable books ever written…” With a bourgeois upbringing, educated at Harrow and Cambridge, he could have easily become only a great writer or only a civil services officer or perhaps would have just lived on lavishly on his father’s wealth. But, instead he chose a different path, the path that led him to spend more than nine years in gaol, the path in which he was lathi-charged by cavalrymen, the path in which he saw his mother, sisters, and wife in gaol, the path in which he had to sell his wife’s jewellery to sustain their greatly reduced standard of living. Unlike other Congress leaders (except Mahatma Gandhi) he was the only one who successfully transcended all boundaries of sex, race, religion, language etc. among millions and millions in this great country. Recognizing this the Mahatma appointed Nehru as his successor.

Truth be told, Jawaharlal Nehru committed mistakes and blunders, most notable of the blunder being India’s border skirmish disaster with China. But, to blame the partition of India and Kashmir conflict absolutely on Nehru is not fair to him or to history. The other mistakes he can be blamed to a lesser extent have been the dismissal of Kerala’s communist government, India’s tacit support in the United Nations to the Soviet Union when it invaded Hungary, the primary education policy and economic policies of his government, the one man cult that propagated around him and perhaps many more.

India is a today a united, democratic and a very hopeful nation. By and large, the masses have immense faith in democracy (except some areas where the insurgency is flourishing). It was Nehru’s vision with other constitutional builders which made India the only major nation that gave the complete adult franchise to all of its citizens right from the birth of the nation. Even in the grandmother of democracy that the USA is, the blacks did not have complete right to vote at that time. This democracy and its various institutions Nehru nurtured when the newly born nation was under attack from both ends, the extreme left and the extreme right.

My motivation for writing this essay is only to inspire a critical debate on Nehru’s legacy. It is to motivate my friends and acquaintances to dive down in history by reading books, to believe on facts rather than crude and vague ideas that are propagated through social media. This essay is far too short to cover even a single facet of Nehru’s life or any of his decisions in detail. Only through reading about the man, his ideas and the perception of him among his colleagues and his opponents and masses will one able to portray a picture of those times and of the man himself. To judge a man only from his failures and not his successes, without understanding the times when the decisions were being made is unfair in the least and moral crime at the extreme.

I end here with few quotes from his various colleagues and political opponents which portray different aspects of his nature and his legacy.

“Jawaharlal and I have been fellow-members of the Congress, soldiers in the struggle for freedom, colleagues in the Congress Working Committee, and other bodies of the Congress, devoted followers of the Great Master who has unhappily left us to battle with grave problems without his guidance….. It was, therefore, in the fitness of things that in the twilight preceding the dawn of independence he should have been our leading light, and that when India was faced with crises after crises, following the achievement of our freedom, he should have been the upholder of our faith and the leader of our legions. No one knows better than myself how much he has laboured for his country in the last two years of our difficult existence….. ….Contrary to the impression created by some interested persons and eagerly accepted in credulous circles, we have worked together as lifelong friends and colleagues, adjusting ourselves each other’s advice as only those who have confidence in each other can….. …..His thoughts have sometime a depth which it is not easy to fathom, but underlying them to all is a transparent sincerity and a robustness of youth which endear him to everyone without distinction of caste and creed, race or religion”. —Sardar Patel, October 14, 1949

“… Let me tell you that in the habit of interfering from the top, no Congress President can beat you. To be brutally frank, you sometimes behaved in the Working Committee as a spoilt child and often lost your temper … You would generally hold forth for hours together and then succumb at the end. Sardar Patel and the others had a clever technique for dealing with you. They would let you talk and talk and they would ultimately finish by asking you to draft their resolution. Once you were allowed to draft the resolution, you would feel happy, no matter whose resolution it was.” —Subhas Bose to Nehru, March 23, 1939

“Eleven years younger than me, eleven times more important to the nation, eleven hundred times more beloved of the nation, Sri Nehru has suddenly departed from our midst and I remain alive to hear the sad news from Delhi — and bear the shock… The old guard-room is completely empty now… I have been fighting Sri Nehru all these 10 years over what I consider faults in public policies. But I knew all along that he alone could get them corrected. No one else would dare do it, and he is gone, leaving me weaker than before in my fight. But fighting apart, a beloved friend is gone, the most civilised person among us all. Not many among us are civilised yet. God save our people.” —C. Rajagopalachari, June 1964

“a dream has remained half-fulfilled, a song has become silent, and a flame has banished into the Unknown. The dream was of a world free of fear and hunger; the song a great epic resonant with the spirit of the Gita and as fragrant as a rose, the flame a candle which burnt all night long, showing us the way. The loss was not that of a family or community or party. Mother India was in mourning because “her beloved Prince has gone to sleep”. Humanity was sad because its servant and “worshipper has left it for ever”. The “benefactor of the downtrodden has gone”. The “chief actor of the world stage has departed after performing his last act…”. — Atal Bihari Vajpayee, June 1964 (translated in English by Ramachandra Guha)

North Korea on the Brink: Socio-Political Impacts of a Nuclear North Korea
Urdu and the BJP: A Fine Example of Classic Hypocrisy