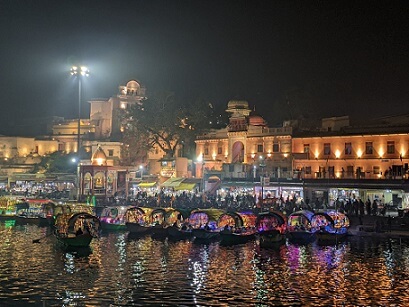 India is an old and diverse entity clothed as a young nation-state. Unlike other cultural entities and nations bound by a single language, religion, or race, India houses a multitude of sociological entities. In my view, India is and has always been bound by stories. And there are no greater stories in the world than Ramayana and Mahabharata. I will write only about the former here since, unlike the much lengthier latter one, the former’s canvas spreads across the whole of India.

I was very fortunate to visit Rameswaram as a child. The beauty of the seashore there with the humungous temple decked with an infinite corridor left an indelible mark on me as a child. Partly out of curiosity and partly because of my fondness for Rama’s tale, as far back as I could remember, I started fantasizing about visiting every place that Rama traversed in the story. Now, at length, I am very happy to say that I have been able to cover most of the major ones.

As we all know, Rama’s story begins and ends in Ayodhya. Though Ayodhya as Rama’s birthplace, it was not to be his karmabhoomi. Perhaps, something of India’s magnitude and not just a kingdom in Awadh was essential to paint a story so vivid that after thousands of years, it still binds people of this vast nation. Ayodhya’s importance has been written about not just in India but as far as in Indonesia and Thailand where cities were practically named after it and the king of Thailand still bears the title “Rama.” After Supreme Court’s verdict, the grand temple at Ayodhya is being constructed as I write and it would be great to see what all has changed once the construction is over. It is from Ayodhya that Rama started the 14-year exile along with Sita and Lakshmana.

In 2011, I moved to Allahabad for my undergraduate studies where at the confluence of Ganga and Yamuna, Rama was mesmerized by Sangam’s beauty. About the event, Tulsidas has written in Ramacharitramanas:

Blandly translated (for I am no poet), it goes like this: Who can express the glory of Prayag, only the sight of which is enough to destroy the vessel of sins in the same manner as a lion annihilates an elephant The sight of it, the Lord of pilgrimages (Prayag), is such that even Rama, himself the ocean of bliss, is elated watching thee. Next to Sangam is a temple dedicated to Hanuman who is lying there on the ground with the story that this was where Hanuman was struck by an arrow fired by Bharata when the former was on his way back to save Lakshman’s life.

It was at Sangam that Rama met Valmiki and asked him where should he stay during the exile. Subsequently, Rama went to Chitrakoot where it is said that the three spent twelve out of fourteen years of exile. I got an opportunity to visit Chitrakoot just a few days back in December 2020. It was at Chitrakoot that Rama came to know of the demise of his father, Dashratha when Bharata came to request Rama to move back. An absolutely beautiful place, Chitrakoot is home to hundreds of temples related to the epic (Anusuya, Gautama, and other characters in the epic) as well as to the temples dedicated to Tulsidas and Hanuman who are said to have met each other there. The calmly flowing Mandakini river with colorful boats decked across the shore is a sight to behold at night. There are also deep caves filled with knee-deep water where the three are supposed to have stayed during their travel. The town also featured a few months back in the web series named Paatal Lok along with the melodious Kabir bhajan: Sakal Hans Mein Ram Viraje. In 2008, I visited Pachavati near Nashik on the bank of river Godavari. It is said that this was the place where the three lived during the thirteenth year of their exile in a shelter made under five trees (thus the place’s name). The place features a space Sita was abducted by Ravana here and there is a beautiful cavelike temple that you takes you well below the ground. Attached to this temple is a fairytale story, of the sort common in our folklore, that how the “real” Sita was made to hide here by the Gods and only a “fake” one was abducted by Ravana.

In Sita’s search, on receiving advice from the injured Jatayu, Rama started moving toward the South where he met Shabri, Hanuman, Sugriv, and his warriors. In 2018, I visited the ruins of the old Kishkindha kingdom near Hampi in Karnataka. There are still lakes and temples supposedly resembling the mythical Pampa Sarovar and places where each of them met Rama. My favorite place in the area is a temple where Ramacharatrimanas is sung uninterruptedly no matter what time of the day it is. It is said that it was at the adjacent cave that Rama and Lakshamana stayed for three months during the monsoon. Looking at the surrounding area full of river streams and hills, it is not hard to imagine why no travel could be done in India at that time during the monsoon since not much has changed when it comes to the fierceness of the monsoon rains and the helplessness of mere mortals, despite the presence of modern roads and automobiles.

In 1996, 1999, 2008, and 2016, I had the privilege of visiting Rameswaram. It remains to this day one of my favorite destinations. Words cannot do justice to the peace and calmness one feels inside the temple especially when the gods are taken to rest at night in a joyous procession amidst music emanating from Nadaswaram and Thavil. The long corridor running across the temple is the longest in any temple in the world while pictures cannot convey how majestic and beautiful the temple’s architecture is. It was here that Rama prayed to Shiva before crossing the sea to reach Lanka. A few miles from the Ramanathaswamy Temple is located a smaller temple dedicated to Vibhishana where Rama had proclaimed him as the king of Lanka when he had defected. A little further, at the edge of the island lies Dhanushkodi (or the ruins of the former town that got washed away in a cyclone in 1964). It is a calm yet dangerous place, a razor-sharp point of the island surrounded by sea from three sides with only a narrow road connecting it with the rest of the island. I have never seen the ocean so turbulent (and I have seen a few across the world) near the shore that one cannot dare to even put their feet in water for a moment. As we all know, Rama came back to Ayodhya after winning the war and eventually had to ostracize Sita, sending her to exile. In 2012 while studying at Allahabad, I visited Sitamarhi where lies Valmiki’s ashram that had given refuge to Sita and where Sita had willingly laid her life by descending into the earth through a crevice. Again, there are a few temples and caves claiming to be a part of the tragic tale.

There are two places that I am yet to visit and I will of course grasp the first chance I will get to visit them. The first is Gaya where not only that other great son of India, Buddha, achieved Enlightenment but where Rama, Lakshman, and Sita traveled with the mortal remains of King Dashratha for his last rites. The second is Sita’s birthplace situated in Nepal that houses a grand place.

As it goes with old stories and folklore, there are of course many discrepancies between places claiming to be witnesses of events from the great epic. This is natural since there are many versions of the great epic (हरि अनन्त हरि कथा अनन्ता, कहहि सुनहि बहुविधि सब संता). If you ask me about the authenticity of the places that I have visited or about the authenticity of the great epic itself, I would say that it does not matter in the least to me. I do not believe in magic and so Hanuman flying to and fro between Lanka and the Himalayas in a single night is beyond my rational comprehension. Yet, as a story, I get delighted every single time I read or listen to it. Perhaps such is the great effect of stories upon us, they bind us together. This beautiful diverse land of India has been bound by millennia through hundreds of such stories that have been weaved into its cultural fabric by our ancestors. They form the greatest treasure that we owe to them and this most beautiful of the lands.

The Illusion of Free Will: Reflections Based on Self-experience
Bundelkhand's Multicultural Milieu: Narmada-Jamna Tehzeeb