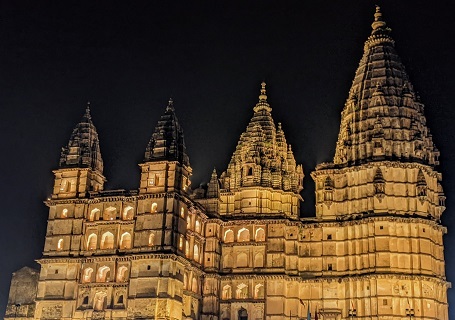 The Doab region of present-day Uttar Pradesh has for millennia been amongst the most fertile regions in the world. As the Harappan Civilization mostly concentrated along the Indus and its tributaries declined, the cultural center of the Indian Civilization shifted to the fecund region lying between Ganga and Jamna (Yamuna). The word Doab refers to the land between these rivers (“Do” meaning two and “Aab” meaning river). Centuries later when Islamic conquerors ruled over this land and many Hindus, especially from the oppressed lower castes embraced Islam, a process of cultural amalgamation was initiated. The process was not entirely peaceful (as evidenced by the destruction of temples in Varanasi, Ayodhya, etc.) but it nonetheless produced a syncretic, if at times fragile, Hindu-Muslim cultural bonding.

Perhaps the two greatest gifts that this so-called “Ganga-Jamuni tehzeeb” bestowed upon humanity are Hindustani Classical Music and the Urdu language. Not a single Bollywood melody would have been possible without them. One can scarcely think of a song that does not have words from Urdu and music not inspired by the syncretic Hindu-Muslim culture. But, let me not digress from what I intend to write upon because of my love for old Bollywood melodies. In our polarizing times, with the rise of myopic religious nationalism, this centuries-old “Ganga-Jamuni tehzeeb” is, unfortunately, fracturing day-by-day, bit-by-bit, or as it happened in December 1992, brick-by-brick. I was myself born in the Doab region imbibing the “Ganga-Jamuni tehzeeb” in childhood and thus it is saddening at a personal level to witness the unraveling of this syncretic culture that had taken centuries to shape.

As the syncretic culture mournfully gives way to an insidious form of political opportunism, during a recent trip to Bundelkhand, I found much solace in how it has been treasured and cultivated there for centuries. Lying between Narmada and Jamna, and home to two of India’s cleanest and calmest rivers, Betwa and Ken, Bundelkhand must be on the go-to list for anyone interested in the subcontinent’s history, geology, and wildlife. Going from North, one enters Bundelkhand through Datia after passing a small segment of the canyons made by the mighty Chambal. The Datia Palace atop a rock visible at a distance from the highway itself suddenly welcomes you with only one perplexing question: how did such a magnificent and picturesque monument in Indo-Islamic architecture escape the posterity’s appreciation? Yet, more baffling sights await as one goes ahead.

Situated by the Betwa is Orchha, the erstwhile capital of the mighty Bundelas to whom our history books have not done justice. Orchha with its ancient and well-preserved forts and temples comes out as a place frozen in time through centuries and yet has all the energy characteristic of a religious metropolis in India. The first strange question that confronts a visitor in Orchha is why the city’s most revered idol of Rama (in the form of a king) is not housed in the grandest temple of the city (the Chaturbhuj temple), the like of which is not present in the whole world? As often happens in India, there is an elaborate and if you believe in avatars, altogether believable story behind this discrepancy which I shall not recount here to tease you to visit Orchha and hear it for yourself.

In terms of architecture and rituals, the Raja Rama temple in Orchha is a one-off in the world. While there are many examples in the subcontinent of forts and gurdwaras built in the Indo-Islamic architecture with domes, minarets, and arches, it is rather customary to house the Hindu deity under a temple built in either Nagara, Dravida, or Vesara style. Not so in Orchha. The Raja Rama temple resembles more of a Sikh Gurdwara than a Hindu temple and is a beautiful example of the best that the syncretism between multiple cultures has to offer. The most captivating sight in the temple is the morning aarti (prayer) ritual. Since Rama is present in the form of a king in the temple, the police personnel give a Guard of Honor to King Rama during the morning aarti. Constitutional proprieties aside, when the police personnel stomp their feet, point their rifles upward, and salute King Rama, the sight is spectacular to behold because of Ramayana’s impact on the collective psyche of our people and can only be witnessed in the fabled land of contradictions called India.

Going deeper into Bundelkhand, one encounters the most charming and realistic figures on the temples in Khajuraho. Not much is left of the thick forests that shrouded these temples from the outside world for centuries until they were rediscovered in British times but still, the place feels quite remote. Mostly known for the erotic nature of the sculptures (which only constitute about ten percent of all sculptures), there is so much more to the beauty of the temples in Khajuraho (not to say that the erotic sculptures are not beautiful). Everything from facial expressions, subtle variations in postures (no, not just “those” ones!), and placement of idols in particular places and directions on the temples’ shikharas convey hundreds of hidden meanings and tell wonderful enthralling stories. A short drive from Khajuraho lies Raneh Falls made by what can justifiably be called India’s Grand Canyon. Just a passing look at the igneous rocks and Ken river meandering through the canyon and making many waterfalls is enough to internalize that this region is older than history, ancient amongst the ancients. Volcanic eruptions almost half a billion years ago started to form this canyon in the Vindhyas (the traditional boundary between northern and southern India). Near Raneh Falls are Ken Gharial Sanctuary and Panna National Park both of which one must go as a ritual since they are rich in wildlife and are still untouched by hordes of tourists that characterize many other national parks in India. A part of the Panna National Park also houses the only diamond mine in India still in operation (another example of how old the terrain is). Pandava Falls is also nearby and houses a few caves where supposedly Pandavas spent in disguise a part of the last year of their exile.

The above backdrop of the remoteness and prehistoric nature of the terrain was given so that one can appreciate how distinct the region is from the agriculturally-affluent Doab. Unlike the Doab, this part of Bundelkhand also has a significant Tribal population with its rich history and culture. Their culture and tradition of pantheism and respect for the local vegetation and wildlife only add to the multicultural milieu of the region. Unfortunately, as is often the case in India’s hinterlands, they are economically weak and the children have to often walk for miles every day to go to school (local schools in villages do not have regular and inspiring teachers). It is very common for one son of the family to stay behind to take care of aging parents while others move to cities in search of employment. Yet, despite the gloom, people there told me that for the first time ever they got to “know” who India’s prime minister is since they became the beneficiaries of the Ujjwala Yojana (an example of how the government’s last-mile delivery has been very efficient).

The nearby sleepy towns of Panna and Satna contain various small monuments reminiscent of their rich cultural heritage in the past and the strategically located Kalinjar Fort is another example of the rich syncretism between different architectures. My favorite landmark here was is the main temple in Panna which from its architecture can easily be misconstrued as a mosque or a gurdwara. The temple imbibes the best of all religions with depictions from each of them on its walls. Scriptures from all major religions are discussed there while iconoclasts like Kabir are revered by the followers. Musicians sitting at corners in the temple represent the pinnacle of the spiritual tradition common to all religions by singing the couplets written by Kabir, Ravidas, Nanak, and various folk composers. Despite the glorious segments highlighted above, a sense of sorrow for the region runs through the above narrative. Even with such a rich heritage of pluralism between various cultures and religions, Bundelkhand’s contribution to India’s culture has largely gone unsung. This is mostly due to the singular fact that because of its terrain’s volcanic past, the region has never agriculturally (and thus economically) flourished. While the low productivity of the land poses a big issue, the only kind of riots one hears about in Bundelkhand are water riots. Bundelkhand’s tragedy has been that despite imbibing the best of syncretism between different cultures it has never been able to capitalize on it because of being economically weak.

Let me end this journey with a Bundeli parable. The local folklore goes that Aurangzeb, religious bigot that he was, once commanded his general Randulha Khan to raze down the majestic Chaturbhuj Temple and replace it with a mosque. As Randulha Khan started marching toward Orchha to carry out Aurangzeb’s orders, everyone in the town was in a state of panic. While all priests and warriors were discussing how to stop Khan’s army and save the temple, a youngling from the crowd wearing a turban came forward assuring them that Khan will not be able to do any harm to the temple and city’s inhabitants. Of course, nobody believed the youngling. As Khan approached the temple’s mighty gate and roared to open it, everyone within it started to flee for their lives. To avoid a bloodbath, the high priest opened the temple’s gate and Khan gave an order to behead him. Just then, the youngling leaped forward to shield the priest and shouted at Khan to stop. Visibly agitated, Khan ordered his soldiers to behead the youngling as well. Not to be afraid, the youngling ferociously screamed at Khan and started to take off the turban. Suddenly, Randulha Khan started to shiver in disbelief as if he had been hit by a lightning bolt. Unfurling the turban, the youngling turned out to be a gorgeous lady with long hair and a stately demeanor. She was none other than Aurangzeb’s own daughter, Princess Badrunisa! She had been living in Orchha under disguise with her lover, Prince Indramani, the son of Orchha’s King Sujan Singh. The Chaturbhuj Temple which is the most widely known architectural landmark of Bundelkhand stands tall and majestically today overlooking Jahangir’s Palace because love had triumphed over hate and bigotry then.