The Legacy of the Hindustan Socialist Republican Association 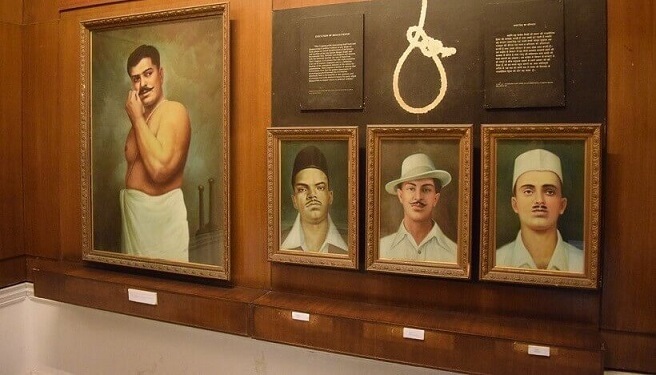 Death is the worst, a Fate which all must try

And, for our Country, ‘tis a Bliss to die.

—Alexander Pope’s translation of The Iliad

The name Hindustan Socialist Republican Association (HSRA) may not ring bells in one’s mind but I am sure that everybody is familiar with the prominent members of this organization: Chandra Shekhar Azad, Ashfaqulla Khan, Ram Prasad Bismil, Bhagat Singh, Sukhdev Thapar, Shivaram Rajguru, among others. These great icons of the Indian freedom struggle are fondly remembered each year on their birth and death anniversaries while they have also been portrayed in many movies. Perhaps the single-most fascinating thing that attracts Indians to them is that they showed an alternative, albeit violent, to the Congress in the struggle against the British.

The first thing to keep in mind about HSRA (that is often overlooked) is that, as the name indicates, the organization was Socialist. This should come as no surprise since at the time Socialist revolutionaries were active across the world in the struggle against Colonialism. The Socialist nature of HSRA’s socioeconomic thinking comes out in its writings. Bhagat Singh, the prodigy and easily the most interesting of the lot wrote profusely in the prison about Socialism. This is why some historians go as far as saying that had he lived, his charisma and potential could have made him an Indian Lenin. But, what also must be kept in mind is that these revolutionaries were not blind communists as they did not pursue the path of violence for the sole purpose of attaining political power. Bhagat Singh and his group intentionally threw bombs in the Central Legislative Assembly not to kill but as an act of defiance after which, they surrendered themselves. He was all of 21 then!

This is perhaps the most fascinating thing about the HSRA: the revolutionaries were agewise very young and yet they were highly matured in their thinking. Bhagat Singh and Sukhdev were hanged when they were 23, Rajguru was even younger at 22, Chandra Shekhar Azad died at 24, Ashfaqulla Khan was hanged at 27, while Bismil was 30 then. It is a feature of those revolutionary times that Bismil Azimbadi who was not himself a member of the HSRA was all of 20 when he composed the memorable revolutionary poem “Sarfaroshi Ki Tamanna Ab Humare Dil Mein Hai.”

There is not an iota of doubt that Gandhi and majority of the Congress did not support HSRA’s activities and ideology. Gandhi often wrote against HSRA while calling its actions as “cowards” and “dastardly.” He also expanded on how HSRA’s activities will adversely affect the Indian freedom movement. Yet, the relationship between Congress and HSRA was not all hostile but rather complicated. While no Congress leader from Nehru to Patel supported HSRA, it is also true that when these revolutionaries were on a fast in the prison against the government’s harsh treatment, Nehru did visit Bhagat Singh, Batukeshwar Datt, Jatin Das, etc. in the prison. Nehru wrote in his autobiography, ‘They were all very weak and bedridden, and it was hardly possible to talk to them very much. Bhagat Singh had an attractive, intellectual face, remarkably calm and peaceful. There seemed to be no anger in it. He looked and talked with great gentleness, but then I suppose that anyone who has been fasting for a month will look spiritual and gentle.’ It is also a matter of historical fact that Gandhi did request the Viceroy to commute the death sentence given to Bhagat Singh, Sukhdev, and Rajguru. Furthermore, Chandra Shekhar Azad, the maverick, secretly received funds from Nehru père for his activities while toward the end, he also confided to Nehru fils about the futility of HSRA’s violence.

But could HSRA have realistically realized the goal of Indian Independence? In 1857, many princely states had come together to fight against the British Rule but had failed since many other powerful princely states came out in support of the latter. The political and economic institutions established by the British in the princely states as well as the rest of the subcontinent favored the status quo. Because of their institutions, the British were able to rule over 300 million Indians while at any point in time only a few thousand of them lived on the subcontinent. Thus it is hard to imagine how the assassination of a few replaceable Britishers and colonial officers could have made India (or for that matter any other nation in Asia or Africa) free. Even when freedom came in 1947, the major reason was not that Indians had suddenly crushed all colonial institutions but rather because after the Second World War, the cost of subjugating India had become unbearable for an economically bankrupt Britain.

Violence once ignited is hard to contain: It is only a short step from harming the “other” to harming your own. Thus, it is because of its working during founding years that the importance of the non-violent ideology of Congress deserves all the credit for forging a united nation. A tendency of pursuing political aims by violence could have easily degenerated the newly-independent and highly diverse nation into pandemonium (as happened with many other nations in Asia and Africa).

For all the fault in their violent actions, the HSRA revolutionaries were first and foremost, Patriots. Their acts were motivated by the thought of revolting against the British. By its violent activities, the HSRA sought to avenge the wrongs of the Jallianwala Bagh, the killing of Lala Lajpat Rai, and other atrocities committed by the British. While never a threat to the British rule, it gave a message to the oppressor that they could be given back as good as they will give. Yet, while the HSRA revolutionaries were Patriots for Indians, they remained Terrorists for the British. But such is the complex narrative of those everywhere who pursue violence for political ends. In this sense, the violent insurgencies that India has been witnessing since Independence have their own local heroes who are nonetheless terrorists for the majority of Indians.

Individualism: The Boon and the Bane of American Society
Free-market Political Parties: Another Wishlist for the Indian Democracy