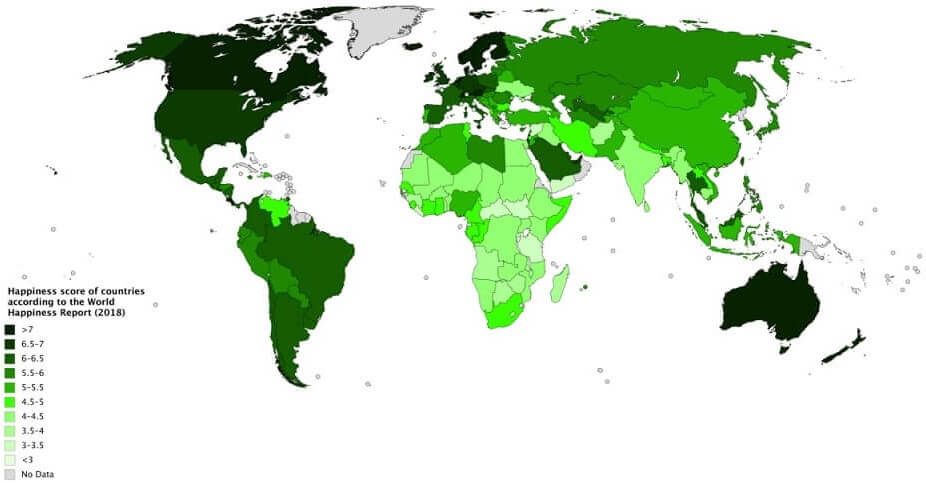 Leo Tolstoy’s iconic novel Anna Karenina has a famous line: Happy families are all alike; every unhappy family is unhappy in its own way. Tolstoy wrote thus since happy families have many things completed on a common checklist such as love and compatibility between partners and siblings, financial stability, respect toward elders, willingness to put time and effort for each other’s well being, etc. The absence of one or more of these attributes renders a family unhappy.

Perhaps this maxim is also equally true for nations: Happy nations are all alike; every unhappy nation is unhappy in its own way. Usually, the Scandanavian nations, Benelux countries, New Zealand, and Canada top the chart of happiest nations on the planet. These nations have many features in common: high human-development index (which inherently takes into account life expectancy, literacy, and gross national income per capita), strong and multiple social security programs, less income inequality, almost no threat from neighbors, geographical isolation from politically volatile regions, highly homogenous population, no or benign history of colonialism, among others. A nation lacking any or multiple ingredients of the development recipe mentioned above can easily find itself battling many domestic and foreign concerns at the same time.

All of the above countries have a very high life expectancy, almost universal literacy, and a very high per capita income. Their social security programs (some call them socialism in its purest and most-practical form) work very well. It is not only education and healthcare that is free but in many of these nations and other nations of Europe, unemployment benefits are extended for more than 2-3 years after one’s loss of job and with compensation that would make most people in the world have the desire to migrate there. Related to the previous point, due to the high rate of taxation especially for the rich to fuel such economic programs, income inequality in these nations is nowhere as close to India or the U.S.

The self-confidence and stability in the society of these nations due to the above domestic policies are only manifest because these nations are geographically isolated from volatile areas of the world (such as the Middle East) as well as aggressive neighbors like China and North Korea. In cases where some threats may originate from neighbors like Russia, these nations have outsourced their security and foreign policy to the United States which guarantees their security. Thus, arrangements like the North Atlantic Treaty Organization (NATO) and the Five Eyes Intelligence Alliance help in securing these nations from any foreign threats.

Unfortunately, India lacks every single ingredient in the recipe for happiness discussed above which perhaps also explains why Indian ranks so low on the Happiness Index Report. While India has done quite well on life expectancy in the past seven decades, its per capita income remains low (a product of its huge population). Besides, India has sadly failed to reach universal literacy (a product of the government’s flawed policies starting right from the post-Independent era). India’s economic redistribution problem when it comes to taxation and social security benefits is that it just does not have enough rich people. Do not let the income inequality in India fool you, the average middle-class person in India is not at all enjoying the same quality of life as his/her equivalent in these nations. India just does not have enough resources to distribute at this point.

Talking of foreign threats, India is located at the very center of major religions, ethnic and linguistic groups, and ancient trade routes. Geography and remnants of colonialism like unsettled boundaries have conspired to place India at a location where domestic and international conflicts are commonplace. The presence of nuclear-armed Pakistan and China next door also ensures that India cannot solely focus on domestic politics and policies but rather that it has to be pragmatic and must aggressively spend a large part of its budget on defense at all times. As the former Prime Minister Atal Bihari Vajpayee once famously remarked, “You can change friends but not neighbors.”

I would rather not write about how diverse India is in all aspects (ethnicity, religion, culture, language, geography, etc.) since any sentence I would write will come with a thousand exceptions and will still be an understatement. On top of all this, the scars of colonialism—economic and geographical—that India bore for two centuries and has bequeathed from the British are still evident in our polity.

Even after all these handicaps, India’s trajectory has only pointed upward since Independence. All minority groups in India have by-and-large flourished during this time while not a single part of the nation has seceded or an inch of indisputably Indian territory has been lost. Thus, the fascination by many Indians with leaders of other nations whose politics are dictated by minor domestic policy issues ignores the beauty of India’s politics and its leaders. The blind clamors for the rise of a Jacinda Ardern or a Justin Treadeu in India miss the point—India is not New Zealand or Canada on any socio-economic axis.

I am not at all implying that India should not learn from other nations but rather that we must not lose the historical and demographic context while making such comparisons. Geographical, cultural, and historical accidents have conspired India to take a different path toward development. It should be a matter of joy and pride that our political discussions are not so much lacking in color and content as to vote in an election solely based on economic redistributive policies of the political parties.

International Cooperation is a Necessity More Than Ever: The United Nations Must be Reformed or Replaced
Individualism: The Boon and the Bane of American Society