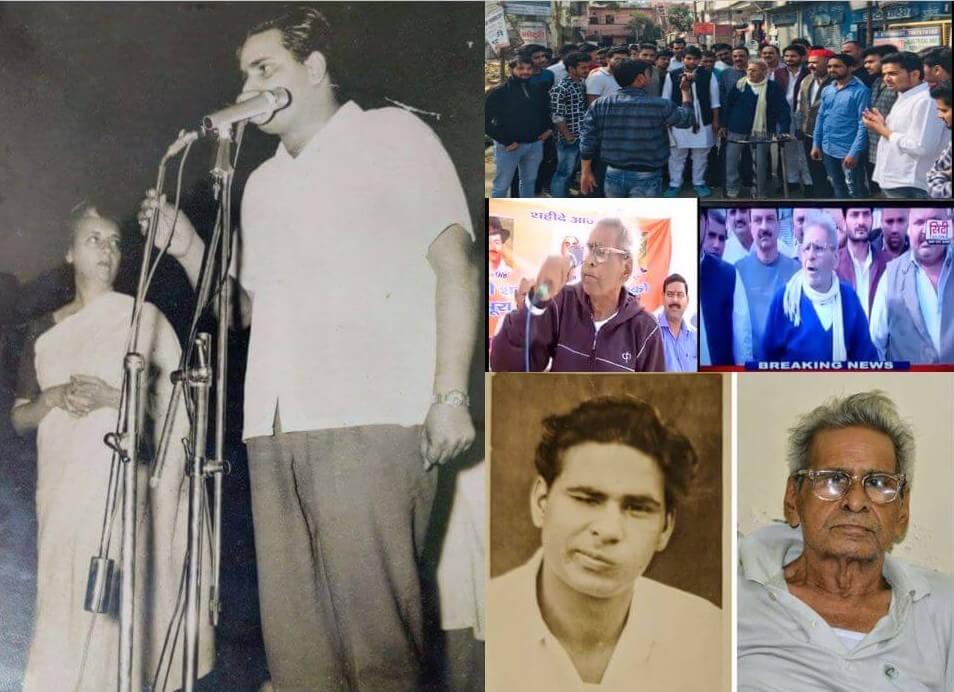 As a self-imposed rule, I never write about my family members or express my admiration for them in public but let this be an honorable exception. After all, my grandfather who unfortunately passed away last year, and whose birth anniversary is today, was truly an exceptional human being. Having said this, I will restrict myself here to pay tribute only to the public persona of my grandfather since it is impossible for me to even conceive about giving words to the personal bond that I shared with him.

A born leader, natural public speaker, and a fierce opponent of the destructive forces of Hindutva, he was also simultaneously an astute statesman, a prolific adviser, and our local community’s moral compass. I have innumerable (and invaluable) memories of listening to his amusing and notorious stories about everything from opposing the force of communalism to, shall we say, containing the excesses of local goons. All through his professional life, he worked on local issues in my hometown of Meerut and contributed toward the betterment of society.

For most of his life, he served in various roles in the Central Bank of India and the All India Bank Employees Association, a trade union furthering the interests of bank employees. In almost four decades that he spent in the organization, he assumed various posts of importance from the very bottom to the topmost and earned an extraordinary reputation for his integrity. Corruption and Nepotism were absolutely alien to his nature. A professional and strong organizer, he was widely known within the banks’ unions in Uttar Pradesh and some other parts of the nation for his activism and no-nonsense nature. “Mishra Ji,” as he was called by everyone never refrained from voicing his opinions and following them with demonstrations whether in the 1970s style of hartals or the Gandhian style of fasting. Courage, derived from his uprightness, was his chief weapon. No matter who was the adversary, he always remarked that he did not fear anybody.

Even during his last years when he had been visibly weakened by various ailments, he continued to be an integral part of the socio-political life of our residential society. Since the inception of the residential society about a decade and a half back to the time that his health supported his endeavors, he worked pro bono as the society’s treasurer among other posts that he held simultaneously from time to time. This was a testament to his integrity since the residents did not trust any other person with the organization’s funds. Ever active in local issues, his demise last year was regretted by many in the city and tributes flowed in from every quarter whether be his old comrades or those in public office. For decades, his house remained the epicenter of local political activity and the natural meeting place for all groups. Local issues to international politics and everything in between were on the agenda each day with tea being served after regular intervals. We had almost a dozen chairs at home, but these meetings were so popular that it was often the case that guests had to bring their own furniture for comforting themselves. In my childhood, I used to be the chief steward for such gatherings while later I was often invited to participate.

Having lost his mother in childhood and growing up with a disciplinarian father busy in managing the affairs of the school he headed, it was perhaps natural that he learned lessons of life not at home or in academia but rather from the first-hand experience in the world. In a way, Mother India became his beloved mother and teacher. Despite a few prejudices, social equality became his ideal. Protection of India’s pluralism remained the central piece of his vision for India’s future. Inspired by Gandhi and Nehru in his childhood, both of whom he had the fortune of seeing many times, the rise of Hindutva disturbed him in his final years.

On top of all this, he bore a striking resemblance in his youth with that great perfectionist, Dilip Kumar, and so people (I have heard women) used to casually ask him to pose like the great actor (as in one of the attached images). He was also very particular about his demeanor—hairstyle had to be immaculate, the face was always clean-shaven, a watch had to be present on the wrist, while everything from the shirt to the handkerchief was always ironed. Independence Day, Martyr’s Day, Republic Day, and other occasions were always celebrated with pomp by him and the celebrations used to get covered by the local news channels (another attached image).

Despite being approached by various political parties during his youth, he always refrained from joining active politics yet invariably continued to work on local issues. One of the attached images shows him giving a speech while Prime Minister Indira Gandhi stands beside him. The image is from 1969-70 when he had been invited to the prime minister’s residence in an event after the nationalization of banks carried out by Mrs. Gandhi’s government. How many people can boast of giving a speech while the prime minister of the world’s largest democracy stands next to them as an audience? He was all of 34 then!