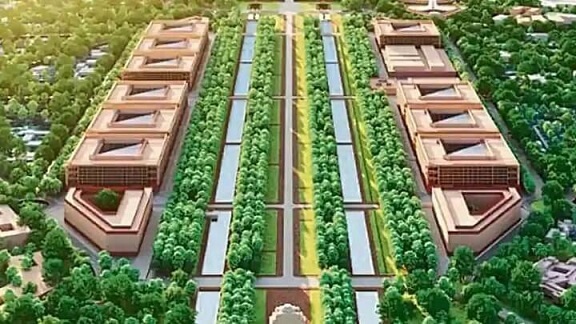 The first thing that strikes an observer while watching the proceedings of the British Parliament—often referred to as the Mother of Parliaments—is the lack of space in both Houses of Parliament. The parliamentarians sit next to each other with a visible want of comfort while they keep various documents on their legs since there are no tables in front of them. The Palace of Westminster which serves as the meeting place of both the Houses of the Parliament traces its origin to 1016 and was rebuilt between 1840-76 after a fire had devastated it. The British parliamentarians are very well aware and proud of the rich history of the seats they occupy, so much so that despite visible discomfort while working, especially writing, no calls have been made to shift the parliament.

Consider also the United States Congress situated atop the Capitol Hill in Washington D. C. whose construction was completed in 1800. For more than two hundred years, the seat of the American government has been the same building that has witnessed, among other things, the abolition of slavery, women’s suffrage, and passage of the civil rights bills. Despite their highly practical attitude with a minimal sentiment of nostalgia, Americans have (admirably if I may add) very well preserved their heritage. The building continues to be upgraded from time to time for accommodating the technological needs of the fast-changing world.

While Britain does not have a written constitution and the U. S. Constitution was drafted in Philadelphia, the Indian Parliament holds the dual distinction of being the seat of the government as well as the place where the nation’s constitution was drafted and passed. The Parliament Hall, despite not at all being as old as The Palace of Westminster or the Capitol Hill is more stately and dignified than either. Adorned with majestic paintings of the founding fathers and many other statesmen and stateswomen of the post-Independent India, the Parliament Hall has seen fierce debates between Vallabhbhai Patel, C. Rajagopalachari, K. M. Munshi, B. R. Ambedkar, Syama Prasad Mukherjee, Alladi Krishnaswamy Iyer, Rajkumari Amrit Kaur, J. B. Kripalani, K. T. Shah and many other delegates of the Constituent Assembly; it has witnessed Jawaharlal Nehru delivering one of the most memorable orations in the history of oratory, Tryst with Destiny; it also heard Rajendra Prasad, the president of the Constituent Assembly, impatiently telling the members that the clock is about to strike twelve and India shall soon become independent. It is to preserve this rich heritage that even today the fans in the Parliament Hall are attached to pillars from the ground rather than suspended from the ceiling, as they were at the time of Independence.

It is exactly this rich heritage that Prime Minister Modi and some parliamentarians supporting the Central Vista Redevelopment Project are attacking. The proposed plan will, among other things, construct a new parliament building (triangular in shape) and a grand new residence for the prime minister on the Rajpath. Both houses of the Indian Parliament are already spacious and many renowned architects have voiced that they can be easily renovated and modernized for the changing needs of the parliamentarians including adding the number of total seats. But, no, all expert opinions have been thrown outside the window by the government which is hell-bent on going forward with the redevelopment plan. Britishers and Americans may take pride in their heritage but if the government gets its way, Indians will bid adieu to the majestic (indeed sacred) houses of parliament where the likes of Atal Bihari Vajpayee, Morarji Desai, Indira Gandhi, Jayaprakash Narayan, Ram Manohar Lohia, P. V. Narasimha Rao, Sushma Swaraj, among so many other leaders and orators fiercely debated for the nation’s progress.

Nostalgia aside, the project comes short on various critical aspects as well. The scheme has a lack of transparency with the public having no access to the blueprint of the scheme. It is abhorrent that the government went forward with asking various firms to come up with designs while the selection process has not been transparent either. Moreover, this is a prime example of the government’s deceitful behavior since it is the people of India who will not only ultimately fund this venture but also together constitute the Indian Democracy whose seat of power vests on the Central Vista. No justification has either been provided as to the need of shifting the prime minister’s residence since the present one is already heavily secured and well-connected to the outside world through a helipad and secret tunnels to the Safdarjung airport and other landmarks. The present residence has been very well adapted to the varying preferences of the incumbent prime ministers. Moving it from a quiet neighborhood of Lutyens Delhi to the Rajpath seems like nothing more than an exercise in vanity and self-love.

One thing you could be sure about Narendra Modi at any time is his ability to transform any occasion into a grand event. The government could have gone forward with constructing the underground monorail network as proposed in the redevelopment scheme along with constructing new buildings to house the National Archives etc. on the Rajpath, without assaulting the heritage. The government could well have cleared other buildings in Lutyens Delhi to construct the proposed biodiversity park while sparing the monuments symbolic of India’s strong and continuous democratic tradition. But, in his pursuit of vanity and the aim of being remembered in posterity, the prime minister has decided to execute a complete makeover of the Central Vista and refashion it in the conception of his own creation.

Hannah Arendt wrote in the Origins of Totalitarianism that the chief qualification of a mass leader has become unending infallibility: he can never admit an error. At a time when due to the COVID-19 pandemic, the economy is in tatters (not that it was doing very well earlier in the year) and India is facing the greatest migration crisis probably since Partition, spending more than 20,000 crores on this ugly exercise shows the government’s priorities. Or, perhaps, as many keen observers pointed out on the social media, the government’s plan to convert the present parliament into a museum of democracy is after-all justified since democracy, as we know it in India, may well become a relic in future through such blind assaults on transparency, culture, and critical thinking.

The Great Liberal Crisis
Cities, Big Business, Entrepreneurs: Mahatma Abhorred Them and We are Paying Today