The Economic Disaster Wrought by COVID-19 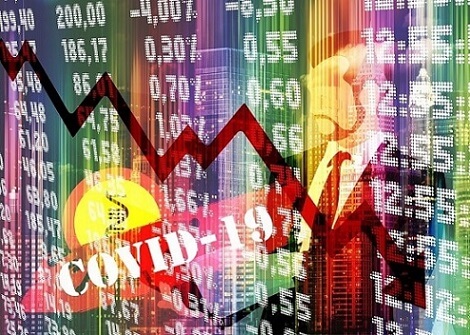 The globalized, industrialized, and incessantly-driven economic world that we live in is similar to an amateur riding a bicycle. The moment he bears a shock, there is a genuine fear of halting down and falling off the ridge. The COVID-19 pandemic is fast-emerging as the greatest shock of our times to the world economy.

With curfews enforced by governments to save lives and ceasing of the economic activity, a recession has already begun. It is no wonder that every single indicator of economic activity is heading southward. Industries have closed down, roads are empty, flights are being canceled, and small-businesses are crashing. Even large corporations have begun to bleed. There are genuine doubts about when things will start to become normal again. As companies have started to layoff employees and roll back on hiring, this is the worst time to graduate from college for those entering the job market.

If all of the above sounds familiar from the 2008 Financial Crisis, then bear in mind that the present crisis is far worse. Here are four indicators of why. First, the stock market has never before seen such a bloodbath. Consider the Dow Jones index. During the 2008-09 crisis, the Dow dipped over a period of seven months or so. Never before in history has it dipped so much in a single month as it has done now. Second, the U.S. economy went into a recession in 2008-09 with a decline of 2.8% in its GDP growth. The best forecasts of most experts today are predicting that we are already there if the COVID-19 pandemic peaks in the following one month. But, if it does not then we are bracing for a situation far worse.

Third, the world economy has never shown a negative growth rate in GDP in our living memory except during the 2008-09 crisis. That time, however, India and China still managed to have high GDP growth rates of 8.5% and 9.4% respectively. By fueling growth during the crisis, these nations were able to absorb most of the shock that the world had incurred. However, this time, China—the nation worst afflicted by the pandemic—is itself looking at an economic downturn, at best, and a recession, at worst. India, on the other hand, was already battling stagflation in the past year and has been caught off-guard. India’s only hope right now is that the pandemic situation should not worsen or else, with its huge population living below or just above the poverty line, a disaster is waiting to happen. India’s GDP per capita is less than a fourth of China’s while it is best to not compare this metric with that of the U.S. Thus, there is just not enough leeway for the poor. Furthermore, nor is there much space for the Indian Government to maneuver because of the fiscal imbalance it is dealing with this time, unlike the 2008-09 crisis.

Fourth, never before in living memory has it happened that the U.S. Federal Government has moved the Tax Day by three months. This event might sound flippant and inconsequential. But, note that Tax Day has always been sacrosanct for Americans and its extension for the first time is an indicator of the crisis that the U.S. Government is dealing with. Almost a fifth of American companies are zombified i.e. they need a bailout to operate. This fact puts the U.S. government in a precarious situation where it will have to make decisions about where to put its money—in a bailout of these companies or the welfare schemes.

In this economic crisis, as in any other, most of the brunt will be borne by two kinds of people. First, those at the bottom of the economic ladder will, sadly, pay the most. With no or scarce financial security, less than par hygienic conditions, and no employment safety, it is the poor who will become increasingly dependent on the community and the government. Second, those nations whose apples are more or less in a single basket i.e. which do not have a diverse portfolio will witness the most disastrous consequences. For example, Thailand, a big share of whose economy is dependent on tourism, and Saudi Arabia, a major chunk of whose economic growth comes from the revenue of oil sales, are looking toward a calamity.

For all the bad news, there is also hope that things will not become worse as they did during the Great Depression. There is good evidence from the various economic recessions in the past five decades to say that we will get out of this one rapidly as well. First, social safety nets are present now in most nations of the world (incidentally introduced in the U.S. only after the Great Depression). The governments know a lot more now than they did a century ago about how to effectively put money into the system, which policies would work, and how best to ensure delivery of the welfare schemes. Second, the effects of a pandemic of global proportion can best be met by global financial institutions which are now present unlike a century ago. Active calls are being made by scholars in many nations for collaborating with others to deal with this crisis. At some point, hopefully, the leaders will realize that the utilization of international financial institutions like the World Trade Organization and the World Bank will better mitigate the worst effects of this crisis. Things may not get better soon but in the long-term, it will all be fine (unless you are a zealous advocate of John Maynard Keynes in which case, in the long run, we are all dead). As the saying goes: Everything will be ok in the end, if it’s not ok, it’s not the end.

An uptick of the ceasing of rapid industrial activity is that the pollution levels across the world are decreasing while nature is reclaiming its space. Some experts are even concluding that more lives will be saved due to the reduction in air pollution than will be taken by the pandemic. Oh well, what crazy times we live in.

COVID-19, “Pandemic Diplomacy,” and Re-shaping of the World Order
After COVID-19: Implications on International Organizations and the Global Order