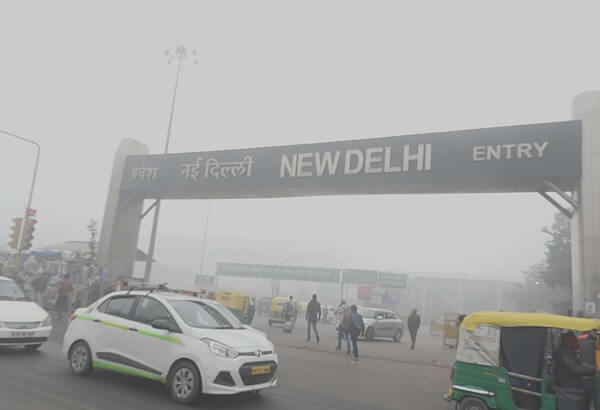 Delhi, or as Delhiwallas love to say, Dilwalon ki Dilli, is an urban settlement consisting of seven ancient cities arranged in a kaleidoscopic pattern. These seven cities reflect India’s history of the past thousand years. Among these seven, there is Tughlaq’s Delhi, Shah Jahan’s Delhi, and Lutyen’s Delhi. Delhi—the seat of empires, the bride of empires, the graveyard of empires. Delhi—the embodiment of power, the manifestation of politics, the realization of ambitions. Delhi—the sangam of cultures, the intermingling of cuisines, the confluence of architecture. These are some of the features that generally come to mind while reminiscing of Delhi. To these, let me add another: Delhi, the city of deaf and blind.

In 1911, the British decided to move their capital from Calcutta to Delhi. Some observers noted at the time that this was a foolish decision from the Empire’s perspective since Delhi had historically been the graveyard of many empires. Nevertheless, the British took twenty years to construct a new city along the river Yamuna. Sure enough, in twenty more years, the British Indian Empire was dead and buried. But, Delhi remained the seat of power. The founding fathers decided during the transfer of power that it would be easier to utilize the British institutions of governance in Delhi for the stability of India. At Independence, the city was incredibly beautiful, not highly populated, though incredibly hot during summers. But, just after Partition, the city’s population increased by over 50% due to the influx of refugees mostly from Punjab. Since then the city’s population, as well as its political power, has been ever-increasing.

Delhi—the city of deaf According to the World Health Organization, nine of the ten most polluted cities in the world assessed over the past decade are in India. Three of these nine (Faridabad, Delhi, and Gurgaon) fall into what may be called the greater Delhi-NCR (National Capital Region) area. When Delhi suffers from heavy levels of air pollution and is thoroughly subsumed in a thick shadow of smog during November-December, much hullaballoo is created by the media. This is because practically the whole of the government apparatus and big media houses are situated in Delhi. But, what about other cities/villages in India? Will the elite political class enjoying their lives in spacious Lutyens Delhi bungalows never care for those living nearby polluted water streams and industries secreting hazardous waste? Disregarding nuclear and industrial waste, when it comes only to air pollution, just one figure shows the extent of India’s heavily centralized state apparatus: 41 (or more than a third) of the total 119 air quality monitoring sensors around the country are in Delhi alone. For the month of November, at least five other cities among those for which the data was collected had a higher level of air pollution on average than did Delhi. Yet, there is practically no apparatus for real-time monitoring of air quality in most cities and rural areas of India. And, we are here focusing only on air pollution while there are many sources of other kinds of pollution due to mining and manufacturing industry in other parts of the country. The inhabitants of all these places suffer quietly, unheard, unheeded, unnoticed. They are like all those entrepreneurs who have grudges against the government for what is being done to them and yet suffer silently since the political bosses in Delhi are in no mood of lending an ear to criticism.

Delhi—the city of blind Delhi has literally become the city of the blind. Hazrat Nizamuddin had famously said about Ghiyasuddin Tughlaq’s return to the city in the fourteenth century: “Hanooz Dilli dur ast [Delhi is still far away].” Today, standing at the center of power, Rajpath, and looking around, Delhi still seems to be far away. Smoke and dust reign in every direction. The dip in the air pollution after a little shower of rain is taken as a big respite from the problem as if the air quality has become normal. Air pollution levels are hazardous in Delhi throughout the year (stubble and carbon-based fuel burning in winters and dust in summers being the major contributors) but selective outrage for a couple of months every year has become the new normal, just like sub 6% GDP growth. Much commotion is made when headlines like “Delhiwallas are smoking 40 cigarettes every day” or Supreme Court says “Why are people being forced to live in gas chambers? It is better to kill them all in one go, get explosives in 15 bags at one go” appear in the media. Then, all goes back again to normal. The government has not come up with a transparent multi-year effort on how it plans to combat the problem. Patchwork being done every year will not help in combating pollution since the city’s population, the number of automobiles, construction activity, etc. will only rise every year. The ruling establishment is blind to the city’s lung cancer patients out of whom 40% have never smoked in their lives. For the ruling establishment, there is no urgency to respond since this can neither be painted as a communal issue (at least until now it has not been) nor is it perceived as an embarrassment like the comments made in the Lok Sabha by one of its terror-accused leaders on Nathuram Godse.

Delhi and many other places in India are literally undergoing a public health emergency and should be declared as such. The purpose of the government is first and foremost to ensure the physical well-being of its citizens. Better go back to the Hobbesian state of nature and die fast of diseases and famine in a clean environment than slowly suffocating to death in “modern” cities. The ruling establishment must wake up. I had once written that the public outrage on a particular event is inversely proportional to the distance from Delhi squared. This must not be the case. India can and must do better. It should learn from its own illustrious Chipko Movement and Jungle Bachao Andolan about how public awareness and activism can force the government into action. Nothing less than good air quality around the year should be taken as normal. Else, Nida Fazli’s beautiful lines in another context will continue to ring true in Delhi and much of India:

(Meet everybody by meeting anybody

Today, all are hidden behind veils)

Ethics, Morality, and Actions: From Rodents to Humans, Nations to Companies, Ancients to Contemporaries
2019 - A Year of Paranoia and Missed Opportunities; 2020 - Modi's Indira Gandhi Moment?