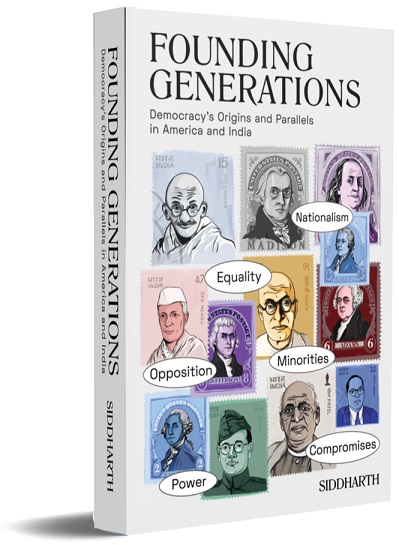 One of my favorite memories about publishing the book has been to work with the amazingly talented illustrator Reshma Shinde on the book’s cover. Besides the fact that the cover denotes the six themes—essential to the working of a democracy—around which the book revolves, the stamps which had the founding fathers engraved over them implicitly signifies the historical nature of these figures. As many readers have already suggested to me, the cover looks very appealing, but behind the scenes, Reshma had actually put in many hours in designing the stamps from the images of the founding fathers. We then decided to put some Easter Eggs in the stamps for the readers and in the process, the choice of color and value for various stamps became a conscious decision rooted in history/culture. Three obvious examples follow:

For many more such Easter Eggs, do read the book which contains a lot of information about the successes and failures of the founding fathers. I am sure you will be able to find them all after going through the book and understanding the contextual information behind the stamps. I wish you all the best in your search!

P.S.- You can also check out Reshma’s amazing illustrations from various projects here.