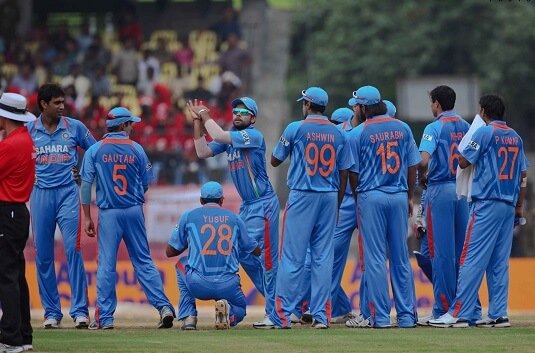 From the past few weeks, I had been planning to write this article on the coming Sunday after victory in the World Cup for India but that was not to be. And so here I am, gloomy, dejected, dispirited, yet proud and nostalgic. Where should I begin? Let’s start at the top of our batting lineup.

Rohit Sharma: Five centuries in nine innings in a single World Cup! What a great form he was in throughout the tournament. With immaculate timing and Herculean confidence, Rohit first entertained us for hours on the pitch and then again made us chuckle whenever he appeared for post-match conferences. He was in such a great form that every time when the ball used to be in the air and the camera was not able to follow it fast enough, there was no need to worry since you could be sure that the ball has gone above a man in the infield rather than towards an outfield one. Based on his track record, every time Rohit scored a century, one felt that he would score another in the next fifteen overs. I am sure that from now on kids will not take it with resentment when their parents would taunt: “Sharmaji ke bete ko dekha hai, seekho kuchh usse.”

KL Rahul and Shikhar Dhawan: They say one man’s misfortune is another man’s opportunity. Dhawan played very well and will continue to play for years to come but it was Rahul who capitalized on the opportunity he received in this campaign. Rahul took some time initially to adjust himself in the role that the team wanted him to play. He matured very well as the tournament progressed.

Virat Kohli: The most expressive player in world cricket right now. One just has to look at his expressions to infer what is going on in the game. Although he could not score a century himself, one cannot help but wonder how against Afghanistan and West Indies it felt like Virat was playing on a batsman-friendly pitch while everybody else was playing on a different pitch. Virat has a lot to learn going forward as the captain of the Indian side but it was clear that he has matured in the role, as evident from his post-match interviews, interactions with opponents, and that wonderful gesture for Steve Smith.

Hardik Pandya: One of the features of the Indian bowling was the flowering of Pandya as a full-time 10-over ODI bowler. Though he usually conceded extra runs to the batting side, he made great use of “loopy” bouncers and slower deliveries on the English pitches. He then also exhibited power-hitting capabilities with the bat to score an extra 20-30 runs which are always great to put on the scoreboard before hounding the chasing side.

Bhuvaneshwar Kumar and Mohammed Shami: Both performed very well. While Bhuvaneshwar was good at maintaining a low economy rate especially in the death-overs, Shami had a higher probability of providing breakthroughs in the initial stages. It was thus not possible to play with both of them in every match. Again it was a case of misfortune for one becoming an opportunity for the other when Bhuvaneshwar was retired hurt in the match against Pakistan and Shami had to be called in from the next match.

Yuzvendra Chahal and Kuldeep Yadav: The duo who has won many matches for India in past few months performed outstandingly well in most matches except when other teams (Afghanistan and England) were playing spin well. Both complimented each other in many ways and the one disguised and often overlooked factor by which they exerted a lot of pressure on the opposition is by the frequency with which they bowled. It hardly took two minutes or so for them to bowl an over and so by the time they completed their spells, realization used to dawn over the opposition that it was much behind the desired run rate.

Ravindra Jadeja: The so-called “bits and pieces” cricketer proved himself with the bat, with the ball, as well as in the field (every time when others in the team used to suffer from “niggles” while fielding). Since he already answered his critics and garnered praise from his fans, I need not add anything here for “Sir.”

Jasprit Bumrah aka “Boom Boom Bumrah”: Not since the golden days of Glenn McGrath have I seen a fast-bowler with such command on the ball. Not since McGrath has a bowler arrived in the game who could bowl six balls in an over, all different from each other, pitching exactly where the bowler wanted and with the speed that he had in mind. You could hand Bumrah a list with sixty different bowls that he should bowl in the match in a particular order and he could go and do it for you. With a deceptive bowling action and even more tricky run-up, he placed the batsman on the defensive every single time he came to bowl no matter against whom. Every time India needed a breakthrough or wanted to save runs in the death-overs, Kohli gazed across the field, looking for his trump card. Every single time, Bumrah delivered. Not the 50th but the 49th over against Afghanistan in which he bowled six successive yorker-length deliveries was the time when India won the match. Similarly, against Bangladesh, one could feel that the match was over as soon as Bumrah came to bowl past the 40th over.

M. S. Dhoni- I wanted to save the best for the last. Dhoni surely played his last World Cup and it did not end in the way he would have wanted it to. But, he still came out as the third most successful Indian batsman in the campaign. You could see Dhoni becoming the third commentator every time Chahal and Kuldeep came to bowl. You could see Dhoni becoming the captain of the team whenever Kohli used to field outside the circle. You could see Dhoni having a calming effect on his partner while batting to chase a target. Dhoni was virtually at the center of the team. And those hands, at the age of 38, those wicket-keeping hands as Harsha Bhogle likes to call them “are still the fastest hands in the East.” Dhoni would go down as one of the best cricketers, finishers, wicket-keepers, and captains of the game. For a moment when Dhoni hit the six on the first ball in the 49th over, one had the feeling that India would go on to win the semi-final. That game was not over until Dhoni got run-out. It took a lot of time to believe what the eyes had just seen and digest what had just happened. If there is somebody in the team whom you would want to bat for your life, it is still Mahendra Singh Dhoni.

Indian fans dominated the English stadiums to the effect that every game was a home game for us. A sea of blue could be seen in every single match, complete with the tricolor, dhol, bhangra, food delicacies, and passion for the game. Then, there was Harsha Bhogle, the voice of cricket for my generation. As far back as I remember, Harsha has been the commentator, analyst, reporter, celebrity, teacher, and humorist of the game, all rolled into one. His intentional prolongation of vowels and childish smile still continue to make him the greatest sports-presenter in the world.

Where did we go wrong? About two-thirds of the total runs scored by our team in the campaign were scored by our batsmen playing at the first, second, and third positions. This model worked well in most matches but there was one day (against Afghanistan) when we got a wake-up call and then came another fateful day (the semi-final). Our middle order batsmen except Dhoni were good cricketers but they were power-hitters of the ball and were not by temperament or experience adept at building partnerships. If we look at the WC11 squad, there was Yuvraj Singh who had the experience and the right amount of striking capability along with a calm temperament to build partnerships in the middle. It is for this reason that he won India many games across a long stretch of time by building partnerships in the middle. The problem of the number four batsman plagued the team throughout the tournament and though patchworks worked at times, they were not enough to substitute for an experienced player with a calm temperament. As Kohli said, “forty-five minutes of bad cricket” was enough to cost us the World Cup. It is also true that it would not have been the case if the team would have planned better in the past few months to train Pandya and others in the middle to be able to make them bear the burden on a fateful day. We shall all have to wait for four more years to see three stars on our team’s kit.

It was with great interest that I followed this World Cup (like all World Cups since 2003) while planning my sleep schedule to align with the matches starting at 0230 hours and then following them until their completion (which meant biking to work with the phone in one hand at times). The team surely does not need an overhaul but serious thinking on the side of the captain and board is called for. It was always delightful to see the positive attitude of the team (“clinical approach” as the players loved to call it) before every single match throughout the tournament. Our fielding abilities have greatly improved and we are now second to none in the world. However, a pattern around India’s performance in big tournaments that was previously ascribed to the South African team has been emerging in the past few years which is not healthy for our cricket-loving nation.