Verdicts on the Events of 1857 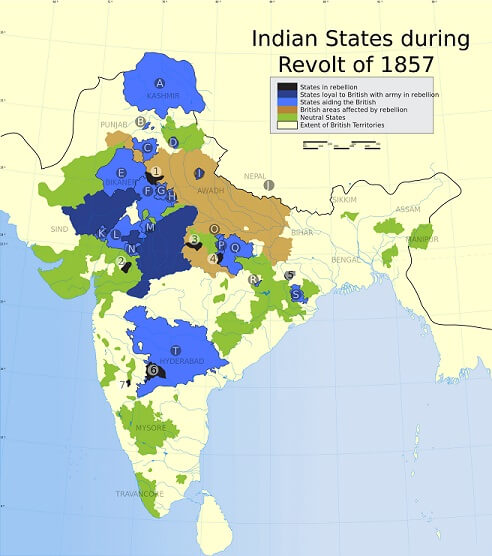 The rebellion of 1857 has been interpreted in three distinct ways by various people. Britishers view the clash between them and Indians as “The Great Mutiny.” Indians, on the other hand, are taught that the rebellion was the “First War of Independence.” Finally, there is the view propounded by some historians that the rebellion was the last resurrection of reactionary and feudal forces. As can be readily seen, these interpretations do not wholly reconcile with each other. The first one is correct from the perspective of a Britisher, an Indian nationalist would adopt the second, while the third would perhaps make sense only to a Marxist. How then should we interpret the events of 1857?

The rebellion broke out in Meerut (thus decidedly bestowing on my hometown a prominent mention in world history) after soldiers—both Hindu and Muslim—revolted against their officers. These soldiers were already apoplectic with rage since the cartridges of the new Enfield rifles provided to them were required to be bitten and were greased with tallow derived from both beef and pork. This was offensive to the followers of both religions. The rebellion turned violent soon after its inception. The many unvented frustrations and resentments of Indians against the British came out with full force and the rebellion spread rapidly across northern India. Many princely states played a key role in crushing the revolt by supporting the British while some formed the backbone of the revolt. These many are plain facts.

The British saw the rebellion as a threat to their rule and rapidly took actions to crush it violently. India to them was usufruct and hence to be exploited in any way that could be economically fruitful. To them, the rebellion was only a prompt expression of resentment towards an unfortunate policy and had nothing to do with the extractive institutions of colonization that they had established. It betrayed their sense of self-righteousness to think of the rebellion as something more. In their view, instead of revolting against the bearers of “white man’s burden,” these heathens should instead have thanked their masters for civilizing them. The rebellion, though unsuccessful, persuaded the British to reorganize the armed forces and provided a stimulant to the theory of martial races. It also led to the transfer of power directly to the hands of the British government from the East India Company. As a safeguard against future uprisings, Britishers further escalated the policy of divide and rule by exploiting the subcontinent’s diversity.

The Indian princely states which were disgruntled by the British policies saw in the rebellion an opportunity to regain their lost splendor. Lakshmibai, the queen of Jhansi, who has been much mythologized in myriad ways had earlier lost her kingdom as a result of the Doctrine of Lapse. Nana Sahib of Kanpur who was a Peshwa of the Maratha empire was also an aggrieved party. He demanded the right to receive a pension from the British after his father’s demise—a claim that the British denied. Both Kanpur and Jhansi served as the focal points of the revolt while other much more powerful princely states such as those of Jaipur, Jodhpur, Udaipur, and Bhopal (in addition to those of southern India) opted for stability by supporting the British empire. Thus, the source of the rebellion remains inexplicable. Perhaps, it was a mixture of anger towards the British combined with personal motives of the belligerents on both sides. In this sense, the rebellion was neither an instantaneous revolt against a particular British policy nor was it the First War of Indian Independence.

In the search of an answer to the earlier question, we may ask another question: what would have happened if the rebellion would have succeeded? It can safely be said that India would not have adopted the ideals of western democracy in 1857. As late as the early nineteenth century, in the Maratha kingdom, untouchables carried a small pot across their neck for savarnas to spit in. The ideals of liberalism, social equality, religious freedom, constitutional conventions that we so much treasure today were anathema to the aristocratic sensibilities of the princely aristocracy. It is inconceivable that Lakshmibai or Tatya Tope would have learned from the British parliament and instituted a bicameral legislature or an elected executive authority. It is equally unthinkable that India would not have become balkanized with a hodgepodge of princely states vying for domination across the subcontinent. Hence, unknowingly or rather in an unplanned planner, at that juncture, the British rule, with all its excesses and cruelties, might still have turned out as a blessing in disguise.

Perhaps more than the rebellion, the year of 1857 should be remembered for something else. That fateful year also heralded the arrival of modern institutions of higher education in India. With the establishment of three universities (those in Madras, Bombay, and Calcutta), for the first time, Indians divided along multiple axes of caste, class, religion, ethnicity, etc. could study together, and so they did. Though the primary motive of these universities and other institutes that were subsequently set up was to produce Indians that were “Indian in blood and colour, but English in taste, in opinions, in morals, and in intellect,” they also produced intelligentsia which could respond to the British in their own language. These educated leaders helped in making India a more equal society, a more self-confident civilization, and an independent nation by overseeing the transfer of power through relatively stable and peaceful means. Karl Marx was wrong about many things, but he turned out to be right in this assessment: England conquered India with the vilest of interests and yet it was an unconscious tool of history that brought about a social revolution in India.

The economist Albert O. Hirschman wrote, “This is probably all one can ask of history, and history of ideas in particular: not to resolve issues, but to raise the level of the debate.” Hence, a healthy debate between the various interpretations of the events of 1857 may in itself be the answer to our question.